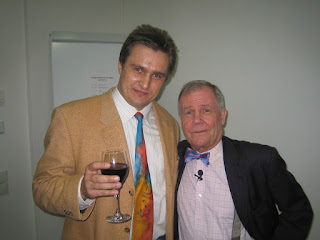 jim rogers + me (february 2008 in munich)
folks, listen 2 invetsment legend jim rogers :-)
source: king world news, march 13, 2010 (abt 30-40 minutes, IMHO 100% worth listening :-):
http://kingworldnews.com/kingworldnews/Broadcast/Entries/2010/3/13_Jim_Rogers.html
some highlights: china; buble in china's real estate; commodities; protectionism, politicians continue to make mistakes; social unrests; war in iran/israel???; energy problem; oil; gas; UK; greece; ireland; €uro; iceland; california; asia (= creditors nations); usa can never repay its current debt; ...
source of written interview-data GoldSilver.com:
Eric King: Is a day of more of a social breakdown rapidly approaching would you say?
Jim Rogers: Well, I certainly don't want it. Nobody does anywhere, but what I can see is they keep making mistakes, and as you keep making mistakes ultimately the situation is going to be worse.
The economic and geopolitical situation will be worse, and so we as Americans are going to be more and more unhappy and that again is not a radical statement. It has always led to social unrest. We are seeing some now in the US. Other countries in the world have seen governments topple in the last two, three, four years by what's going on. And I am afraid that the people in Washington are making it worse, and if it does get worse as I anticipate, that has always led to social unrest, throughout history, everywhere in the world.
Eric King: If you had to guess on the social breakdowns in the United States, what kind of a time frame would you give me as a guess?
Jim Rogers: Well, certainly within the next decade, I mean that would be easy to say, perhaps sooner. You know Eric I know people who insist that the US will have to default on it's government debt in the next couple of years. That's not my statement, I don't know because I haven't done the homework, but I do know people I admire who swear to me it's going to happen. If that sort of thing starts happening, we have problems at the state level, the city level, and if the US government is in that kind of trouble, whenever it is, whether it's the next two years or in the next ten years, it's going to lead to problems.


Again, I don't like saying it first of all, second, it's just the way the world has always worked, not a radical statement. But if suddenly people cannot get food or cannot get jobs, especially you know, the America of this decade is not the America of the 1930's, in the America of the 1930's people were still disciplined, hard working, much more so than they are now. Now in the US, there is more of a, "you owe it to us mentality" than there was in America a hundred years ago, or eighty years ago. Again that's not a strange thing, it's just a historic fact and people with that current attitude are more inclined to be unhappy and do something about it than others.
posted by jaro gruber @ 1:35 AM