i had to remove the original picture due to google ad sense policies, so here is just the link to it: here

why? just look at my top 3 positions yesterday:
of course, on a day when the top dogs perform like crazy, my portfolio reached a new all-time-high :-)
thx for this nice xmas gift, mr. market, thx! 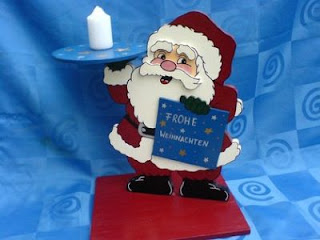 ohhh, just found a 2nd santa on the internet, which one do you like better? folks, i'm not sure, but could this santa and that pretty google's search it for me girl be the same person from flesh&blood? hmmmmm, i don't know 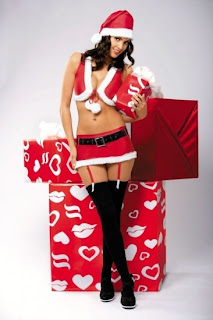 hell, hell, hell!!! it is the inflationary hard assets rally out there, isn't it?

folks, here we go! next support / resistance / mental / whatever barrier broken! can anyone tell me, why i have been such a stupid idiot in december 2008 and bought just one single google share (below $300, i think) instead of 10 million shares? my sweet portfolio position is up +72.8% (in €uros, of course).

what abt google's software buddy + its current neighbor in my by decreasing volume sorted portfolio list, microsoft? well, these bill gates guys are up +44,19% since february 2009. pls do not ask, why did i not buy 10m or 5m shares here, i can't remember that either :o)

why google + why microsoft? even if there prolly is a bubble in u.s. equities (stocks + bonds!) and even if for €uropeans like me is the weak usd concerning our u.s. investments a huuuuge nightmare as well, there always will be many u.s. companies which are able to compete (and to win) on the international markets, i think ...

i've bought google because i like them a lot + the stock price was IMO cheap + because i use sooo many of their products (picasa, blogger, youtube, adsense, chrome, text&tables, gmail ... + their search engine, of course) + because i like their philosophy of sharing data (pictures, videos, documents, ...) all over the world instead of forcing people to use/own their own 'licensed' stuff. you still remember the discussion in one of demolition man's threads abt advantages in sharing knowledge for free instead of patents & copy rights & private knowledge? that's the age of aquarius, in my opinion :-)

what abt microsoft? well, they are not sexy at all, nobody likes them, and of course, they are still in the age of pisces as their 'licensing' strategy is a complete opposite of google's sharing-for-free principles, but in time i bought it, microsoft was IMO soooo cheap + it was the company with the biggest $$ reserves worldwide! they had more than $20 billion cash in that time, i think ... so i just thought, bill gates will distribute all that cash among the shareholders within the next few days, unfortunately, he didn't

both stocks are up a lot, so from my investing perspective is everything going fine so long :-)

(source: here) let me google that for you! source

folks, now i'm really surprised abt google! why? hmmmm, the Let me google that for you site really exists! aaaand is soooooo cooool for/against lazy folks out there. you just insert the key word they've been asked for and get back a link with slow motion keybord entries + the 'click' on the search button + the results. next time they will prolly google their stuff themselves ;o)

ps: have just tried out with 'gold silver' => http://lmgtfy.com/?q=gold+silver ..... hmmm, my website is not the #1 search result yet :-)
... let's try it again with 'gold direct info' to see, if my newly reserved and as an advertisement space or/and domain name 2 sell planned/designed domain www.golddirect.info will come on the 1st search results page => http://lmgtfy.com/?q=gold+direct+info ohh, ohhh, nothing reasonable again :-)

addendum may 2014: friends, forget my dream below ... as for now, the western europe turned fascist as its leading institutions like EC / NATO, its leading countries germany, france, poland ... supports the fascism in ukraine (the fascist temporary and unelected government in kiev led by the svoboda / swoboda party) ... the EC, what a peace nobel prize winner, almost as good as obama few years earlier :-( ... well, at least the femen activists protest against that european fascist epidemic ... 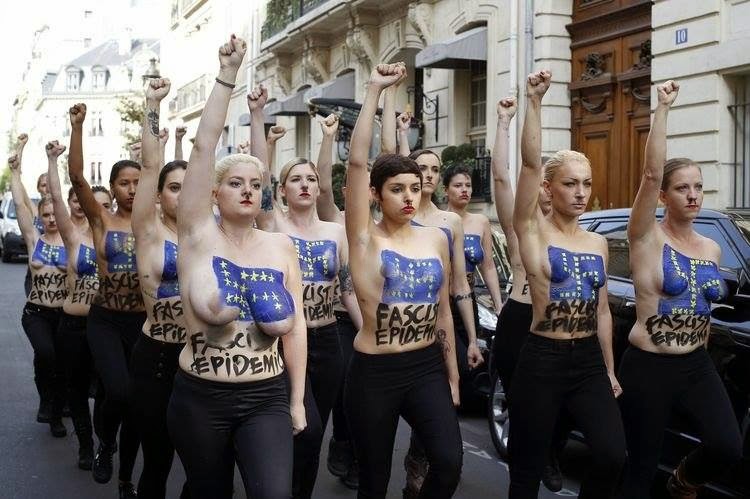 hi folks, there was/is a great discussion abt why is €uro/europe not the leader in the financial markets, kylefoley76's original question was: "if the us and the euro's economies are equally strong then why is it that the dollar seems to dictate the price ... i might be wrong but it seems that the dollar dictates the price in eur/usd ... why?"
----------------
my opinion? because europe is just europe and not UNITED STATES of EUROPE yet ... it is as easy as that!

we europeans are so brain dead and so fearful, you know? ... it is as easy and as sad as that :-(. hell, i hope at least our children will be smarter than we are!


ps: just imagine an united €urope with all that western, northern, mid, southern and eastern (with russia, of course!) countries, with all that industry, oil, gas, commodities, education, culture ... and of course, i'm thinking about an europe created bottom-up by the people and not by any bureaucrats, governments, powers that be, 'elites', fat cats style NWO, central banks aka financial mafia and the like :-)


well, let's hope again that at least our children will be smarter than we are :-) 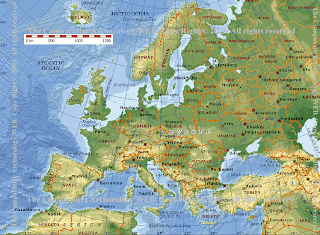 last but not least, who is gonna pay 4 that rescue package? we can read in the mainstream media that this package will be 'carried' by germany, france, austria ... folks, there is a small problem out there! germany, france, austria ... do not have any money to lend. they need themselves (every day!) new credits to continue their current operations ... they have to borrow the money they will lend 2 PIGS and PIIGS (portugal, irland, italy, greece, spain).

well, once again have our so genial politicians managed to take the money from the main street (~taxpayers like me) and give it to wall street (~banks, insurances, hedge funds, ...)

OMG, why is homo sapiens that stupid?

my dear gold/silver standard, pls pls pls come back to planet earth soon and end all that fiat money malinvestments and unfairness ...

anyway, folks, take care and do not invest in government bonds :-)

folks, mr. market shares my opinion abt the outcome of the 'greece issue' on the weekend, just look at the top 3 german stocks 2day morning:

btw, im not against gains for financial institutes in general, im just against taxpayer financed gains for politicians' buddies, of course ...

what a great day 2day! of course, especially 4 the banks, not at all for the taxpayer :o(

is there any silver in silver valley (idaho/usa) ???

folks, i'm such a stupid idiot! why did i bought the bankrupt sterling mining clunker stocks 2day? and why not just once but twice? am i completely brain dead? let's hope i'm only a little bit confused and let's try 2 sort my thoughts! if u promise u will not laugh too loud abt me, i will tell u abt my 'stellar' move ... ok, here we go:

do u still know i've bought stocks of 3 silver companies sterling + sns + minco few months ago? well, they still fight in various legal issues on the idaho's sunshine silver mine (opened 1884, fire in 1972 with 91 dead miners, ...) and there are some other (financial) groups trying 2 take over that historic mine also ...
yesterday i got the investor's newsletter from minco telling that minco is the winner and that they will get 100% of sterling's stock for approx $12m. i just checked the sterling's current market capitalization and saw that they are going 2 pay approx 3 to 4 times the current bankruptcy-adjusted stock price ... hmmmmm, u now me already, don't u? yep, i just saw the $$ signs instead any danger and placed a limit order at €0.07 even if the last u.s. price was $0.08 (and €1 = $1.49) just 2 make sure i will get some stocks. well, there was no other buying in germany so i've ordered the next tranche @ €0.06 and seconds later it was in my portfolio as well ... i didn't get suspect at that time as i know the homo sapiens financialis is soooo damned stupid so i just relaxed and dreamt on even more $$ when the u.s. + canadian market opened. i couldn't believe my eyes! sterling fell intraday -18% there and -25% in germany after my initial purchase. later on the u.s. exchange sterling closed fraudulently at break even thx 2 a micro order moving the closing quote from -18% level directly 2 yesterday's closing price. minco? don't ask either ... they are -5.85% today. hell, does nobody understand that they've got the sunshine mine approx for free? well, the time will show if i'm right this time or mr. market instead ... prolly is the sunshine legal case far from the final firm decision now and the folks out there do know that and just me didn't :-(

what is so special abt the silver valley? silver, silver, silver! you know? if u want to, so skip to wikipedia (and come back :), i liked the short information on hecla mining's website much better:

...The Coeur d’Alene Mining District, where Hecla was born 117 years ago, is located in North Idaho’s Silver Valley along US-90, providing very convenient access and infrastructure. This district has produced 1.2 billion ounces of silver in its history - one of the most prolific silver districts in the world. Hecla has a tremendous land position here… about 25 square miles, which is an area roughly the size of Manhattan. On this land position are many historic mines, which in the aggregate have produced about 300 million ounces of silver, or about 25% of the entire historic production of the Silver Valley....

what is my part of silver valley? well, i've accumulated few stocks of:
my conclusions:
ps: i will update the final status abt the sunshine mine / sterling mining later
pps: do not forget what u have promised above :)
addendum, 1 day later ;o(
oh, my dear! sterling mining is -37.50 % right now ... and has closed at -18.75% with 4 times the usual volume! a huge loss on the 2nd day of my so_sure-$$-investment, isn't it? well, this time was mr. market right and i was wrong :-(

FAQ#1: how does the silver valley looks like? hmmmmm, i will show u how it was 100 years ago, so please use your imagination (or e.g. the google search engine) to find out how it could looks like 2day, ok?

copenhagen, nyhavn (new haven), 2005
folks, today (= 5.12.) at 5 before 12 there started a greenpeace action for climate ´through' twitter in 80 german cities. all the tweets the folks have posted have been projected on a special wall in the centre of berlin to make the german government aware abt the importance of the copenhagen conference ...
well, i came abt 1 hour later and my tweet was approx the #5,555 ... just now there are abt 13,000 tweets out there ... not sooo many as i have hoped and many of them came later directly from the internet, abt 3 or 4 from myself, of course i'm dissapointed a lot that the people in the streets do not make more preasure on the politicians, i think it is soooooo important this time ....
my message? rettet das klima, nicht die banken! (that means: save the climate, not the banks!)
well, i've posted that message to my twitter followers after coming home as well :-)
=> jaro gruber (jarogru) on Twitter
rettet das klima, nicht die banken! #savetheclimate not the banks! http://twitterwall.greenaction.de/ #copenhagen #greenpeace #thinkgreen
my #2: #copenhagen, please don't kill our future! #savetheclimate #Merkel #greenpeace #greenaction #thinkgreen
my #3: have a good weekend all! hopefully politicians in copenhagen will make our future a lot better! #savetheclimate #eco #earth #greenaction
my #4: RT @greenpeace_de: take action #savetheclimate be part of a global movement!!! http://twitterwall.greenaction.de/
folks, do u think it will help a little?
posted by jaro gruber @ 10:08 PM No comments: