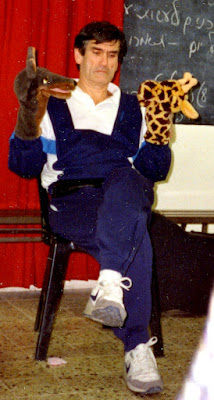 marshall b. rosenberg at a workshop in israel 1990 speaking with the wolf's & giraffe's voices.
(source: free 2 use wiki commons, author etan j. tal).

my friends, alfred adler's psychological approach was not the only audio book, my wife ["the best of all wives" (at least for me) 😃] and me have heard on our journeys, of course. anyway, it remembers me there was another really great "stuff for our minds", the communication concepts by marshall b. rosenberg, we have had on our agenda through eastern germany in june 2020. hearing adler, we tried to move our relationship to a horizontal relation (, where it already was, if you asked me).

hearing rosenberg, we tried to communicate in the way, that we started to:

as 2020 is already few seconds away and i cannot remember all the details, i just looked up some information at wikipedia. well, i do not have any qualms of conscience as i support wikipedia financially almost every year. btw, my youngest daughter also does. that could mean, children learn by example and not by the words we teach them day after day. what do you think?

wikipedia.EN => .... (marshall b. rosenberg) He worked for four years in Norfolk, Virginia's school integration. As a caricature of his program in street talk he offered this version, spoken to himself

Thug, identify observable behaviour. Identify feeling. Identify reason for feeling. Identify wants. Put that out. Make sure other person connects with it. And thug, you'll know a miracle start to happen after a bit. ... <= wikipedia.EN

let's stop violence and let's turn our world into a place of love & freedom & support & understanding. will we? 😍