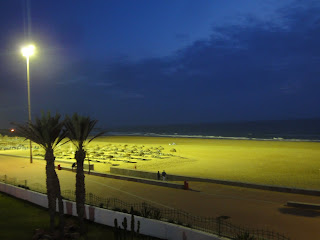 cold days + cold nights + cold wind + cold water in the tourist mekka ‚agadir‘, OMG! much much colder than munich, we have had SUMMER in germany the last few days .... hmmmmm, do u have any idea why do folks call africa the hot continent? so what, lets enjoy holidays anyway :-)

btw, there is a wifi access in the lobby, so i had to see how badly crashed the gold + silver price yesterday (more than -4% each) and then -5% today after gold reached the crazy all-time-high of $1,912 per ounce in the early trading hours in asia/australia on tuesday. of course, i had to laugh when i saw that many mining companies were down 5% cos it is the same rate they were up on the previous day. yes, homo sapiens financialis is really that stupid, ive told ya before, didnt i?

well, i will prolly start the trading battle again as investing makes completely no sense at current levels of stupidity all over the financial markets. as for now i dont have any finance lecture here in order to give my 'peace of mind' some chance :-). so whats my current literature? eckhart tolle‘s 'the power of now – a guide to spirutual enlightenment'. so when you can follow my gibberish from now on, the enlightenment stuff really works! optimistic me, i still hope there will be a day in the future my writing makes any sense, u see?

of course, there will be some additional insights and a picasa photo album soon, but pls be patient as our vacation just begun. as for me, i hope to learn more abt the arab color revolutions, 2 see the castle + port of agadir, 2 visit the atlas mountains and the city of marrakech, …

thx goodness, ive found the only warm place in agadir 2day! it was inside the hamam, my dear :-). btw, are there any arab (speaking) folks who would like to translate the message written below the castle ruines of agadir? 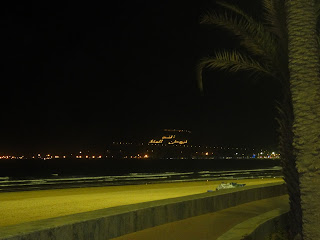 any ideas out there?


the challenging and thus quite unfriendly ‚tasting‘ muslim ramadan month was over after the 1st week of our stay and from one day to another changed the local people to friendly, smiling, sports playing and jokes making folks. hmmmm, what a difference when they are ‚allowed‘ to drink and eat during the day! if u asked me, the god(s) dont like suffering people and the rigid ramadan rules are made by people not by god i believe … of course, im not a quran expert, but as far as i can remember, one of my munich muslim friends told me that the ‚no food no drinks‘ rule is s.th. what can be tried by highly conscious muslim believers and it is even forbidden in many cases (pregnant women, elderly, children, on trips, sick people, etc) and it is definitely not a rule for all. after all, she has studied quran and would be prolly a quran school theacher if she had participated (and passed) the exams, not me … well, who knows whats good and whats wrong? prolly noone completely, so lets accept strange behaviour as part of foreign culture and do not try to convince the folks to change it as the others also do not try to change us :-)