folks, a great great year is over, the stock-exchanges in germany closed @ 2 pm ...
already 2009 was a great (after-crash) year, but 2010 was a mere frenzy for my accounts! guys, ive made more in the markets than in my office job :-) ... much much more ... ie approx 1.5 times more ... pls dont think abt the term 'trading 4 living' cos im not going 2 do that in the near future as it is a big big difference between having to earn money and to withdraw money 4 living each month out of the accounts on the one hand and just playing with surplus money in the markets on the other hand, u know? ... OMG! i still cant believe my success in the markets ... well, cos of my perspective of the financial/economical world out there and my outlook 2011 im not going 2 sell (m)any of my hero-performer-stocks any time soon, so the most profits are still fictive right now :-)
so what happened 2010? my market outlook a year ago was right and so was my strategy! yep, we had an inflationary hard assets rally as commodities and commodity stocks rallied like crazy. imho it is no wonder facing all that stupid bailouts, stimulus packages, quantitative easing and other similar fraudulent interventions ... it doesnt looks like if there is a major change for better to the current investment environment out there, so despite the much higher commodity prices i dont have to adjust/change my old market outlook a lot if at all [wanna read part c) in last years blog?]. its amazing 2 read old stuff after the time has proven what was right and what not, isnt it?
lets look forward 2 the year of the rabbit, lets look forward to 2011 ... and ... 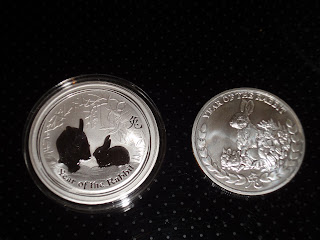 ... lets create a happy new year :-)
final update after the market closed: well, the commodity markets were up a lot yesterday, all my trading positions were 'green', one of my top 10 days ever i think, highest gains with gas + rice for a daily profit of 13.39% => the performance of my micro trading account in 2010 was +347.80%

ps: its just crazy that after my stocks on thursday closed the year at highest level ever, even my CFDs rallied on friday on the very last trading session in 2010 to my personal all-time-high

pps: there were many reasons for my success in 2010, see the prolly most important in the chart below:

addendum september 17th, 2012: The attack on the US consulate in Libya and the killing of the US Ambassador and several aides is another tragic example of how our interventionist foreign policy undermines our national security. The more the US tries to control the rest of the world, either by democracy promotion, aid to foreign governments, or by bombs, the more events spin out of control into chaos, unintended consequences, and blowback. (ron paul's weekly newsletter)

addendum january 6th, 2012: what a clear agenda to change the current destructive course to freedom & peace & prosperity! hell, why do only soooo few folks listen + support the ideas of freedom?


wanna watch more abt FREEDOM? well, its 1 hour and 14 minutes of tough stuff ... enjoy anyway and of course, folks lets fight for freedom and against corrupt politicians and their small dirty regulators whenever and whereever we can! will you?

last but not least, what abt government spending, stimulus packages and re-distribution of taxpayers money? its not going 2 do much good either, is it?


and yes, let's add also a picture of ron paul (in case all these youtube previews doesn't work properly) 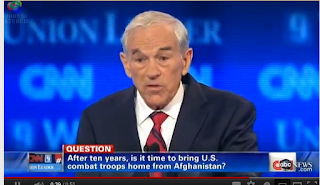 source: taken as a screenshot from here


addendum november 14th, 2012: Congressman Ron Paul's Farewell Speech to Congress  ... ode to freedom + peace + prosperity ... of, course, this 48 minutes video is presented for hard core fans of both ron paul + liberty ~ enjoy ... and yes, good-bye, ron and thanks for your huge contribution to peace + freedom

addendum july 2014: ron paul on MH17, the malaysian civil airplane shot down over eastern ukraine .. so wise, my dears http://ronpaulinstitute.org/archives/featured-articles/2014/july/20/what-the-media-won%E2%80%99t-report-about-malaysian-airlines-flight-mh17.aspx

source: Zimtu Capital Corp. = one of my portfolio companies. btw, zimtu's strategy is to enter the opportunity before the IPO ;-)


folks, mining is soooo exciting, u know? wanna read abt my investment approach?


a) well, i follow the markets daily and i also attend a lot of commodity oriented events like the precious metals fair, other (smaller) commodity shows, investor lunch events for few (approx 10 - 20) invited folks and the like. leftovers is easy, i buy stocks i liked most

... my decisions are based basically on my impression or personal criteria like e.g. company's partners & investors [when folks like rob mcewen, eric sprott, paulson, soros, silver wheaton, pan american silver, xstrata and the like are also invested i believe its almost risk free 2 get involved myself

] ... i dont look-up the company website, financial news, earnings reports and the like at that stage ... of course, im easy 2 impress i think ... after the 1st small 'pilot' buy i subscribe companies newsletters, start following their development and if appropriate i increase my positions

b) my 2nd decision method: i scroll down my portfolio sorted descending by current position value and where my eyes 'stops' thats the stock i increase my holdings in ~ ie intuition again

2.) most potential for long term gains?
i think its the explorers & junior mining stocks


well, this one is the easiest one! its based on the 'life cycle of the typical mining stock' [~ idea => IPO => discovery => a looooong development period i.e. the 2nd chance 2 buy these stocks cheap => production & cash-flow & dividends = the boring fat cat phase of stock's life]

ps: ist there any risk involved? yep, of course there is a huuuuge risk involved: the discovery isnt good enough (too low metal grades, too small overall amonunt of the commodity contained, etc), mngmt not able 2 raise enough money 2 build-up a mine, legal/environmental issues, political risk (congo, ecuador, venezuela, russia, ...), management failure, sometimes even pure fraud (eg the only 'asset' is an advertising/promotion campaign), drop in commodity prices so that the production isnt economical anymore and a lot of similar stuff ... well, thats why i own 100+ mining companies and tend rather 2 increase my existing positions in the good ones than 2 buy a new strongly promoted company, u know?

anything else? hmmm, probably one famous quote about the gold mining industry / stocks:

gold mine is a hole in the ground with a liar at the top ~ mark twain
posted by jaro gruber @ 4:26 PM 4 comments:

stolen from => ehhhm, borrowed from => http://i231.photobucket.com/albums/ee112/infernocy/dreams_of_a_fantasy_world_12.jpg
folks, the headline is the program this time => lets buy few new mining stocks 4 my portfolio and/or lets increase the existing positions => #jarobuys:

well, the donnybrook story was presented by both the donnybrook and donner metals director dave patterson => #jarobuys few more donner shares 2day cos they are still cheap like an unwanted pet => that investment stuff is as easy as that

btw, what do these irish sounding guys do? also easy! theyve acquired a big land package in alberta / canada and now they look for some major gas & oil discovery.
folks, i didnt buy any initial position in donnybrook yet cos the stock tripled since august and thus appears somehow 2 expensive 4 me, u know? well, was prolly a mistake cos the donnybrook rallied +9.76% 2day