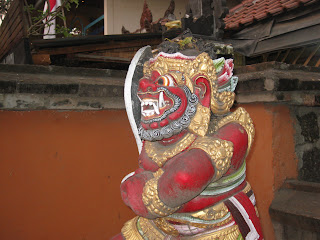 watch out indonesia, watch out komodo dragons, we are coming :-)

folks, of course i'm happy 2 leave tomorrow 2 bali and see a new countryside, new people, new culture ... but i'm such a stupid idiot!!!! i've lost my credit card today :-(. well, i hope i will find it tomorrow morning somewhere in the kitchen or the like. if not i have to call the card company from the airport and block my account ...

damned hell! three weeks completely dependent on my wife as she still has her credit cards. oh, my dear :-(

service desert germany! folks, it was NOT POSSIBLE to block just my lost card! even not possible to speak to a real person! well, we have blocked ALL credit cards of our account at the automatic phone service ... any cold comfort? yeahhh, i hold all eur & usd cash, so now is my wife dependent on me!

BALI? small + nice + friendly! thx goodness bali is shaped by very tolerant hindu religion, so it is a pleasure to move around, meet people etc.

folks, indonesia has launched a new monetary system yet - CANDY MONEY -
well, in a country where prolly everyone is a millionaire and even tourists becomes millionaires by changing $100 in local currency - rupiah - there should be some problems with change coins, isn't it? btw, how would you give back a change of 43,350 rupiah if the smallest common coin is 500 rupiah? here we go, it is 43,000 in bad quality paper money + 3 menthol candys

i'm back now ... it was really nice + interesting + i've finally got some cash through the EC-money-card of our eldest daughter after 2 weeks (~ EuroCheck, just an european account card, not a 'real' credit card like visa, master card)

my overall impressions? there are sooo many of them ... nice countryside; dangerous waves designed just 4 surfers and not for swimmers only visitors with children like us; very commercial tourist services; baksheesh; crowded streets; dogs & chickens walking on the streets; walls + walls + walls everywhere (holding deamons aside?); rice terraces; volcanos; very similar looking temples; gods & ghosts & deamons; IMHO very inefficient spent money on gift sets 4 gods/ghost (3 x daily) and especially on very costly religious ceremonies e.g. 4 burning died family members; exotic fruits (rambutan, mangosteen, papaya, dragon fruit, snake fruit, passion fruit, maracuja, durian [pfui teufl! smells and tastes like toilet! how can mankind plant & eat s.th. like that? DO NOT TRY it !], pineapple, java cherry [folks, i've tried few of them straight from the tree without peeling or boiling them and survived! prolly 'caus i've felt already like at home there and thus even didn't wash them ] + some others where i've forgotten the names already ..., almost only japanese motocycles + cars [heya european + american producers, did u forgot that part of earth?], cheap restaurants with very friendly staff, almost everywhere free wireless internet access available [europe is years behind indonesia in that area!], super duper thai airways service and sooo modern plane equipment => well, everyone had his own screen + remote control panel and thus i could watch movies or play games against any other passenger on board, but after loosing many times in a row against my daughters even in my former favorite game TETRIS i didn't challenge any passenger as i've been sooooo ashamed ... but loosing on the finance markets causes even more pain, isn't it?

what about my trip 2 java 2 unesco's world cultural heritage temples borobudur (budhist) + prambanan (hinduist)? first of all, i had to change all my believes about java there!!! it was not crowded + 100% urbanized + without any field / forest / park / free space / etc. there!!! at least not in the yogjakarta area. by some coincidence of fortune i've got an experienced and sooooo inteligent + friendly travel guide there just for me alone, what a nice day!

ps: my stocks went up like crazy in the last 3 'vacation' weeks, mostly because of advanced gold/silver prices and of course besause of the advanced general stock market. folks, i still hate the crashy october 2008 soooo much! btw, U2? well, if my stocks would rise approx. 1% further my open positions would reach THE BREAK-EVEN-POINT. could you imagine my wife's and my children's surprise? after 3+ years of suffering the hell on earth there would be no damned commets like you fat damned stupid money wasting gorilla moron, you! i hate you sooo much! go to hell or die or both and take all your stupid stocks with you! ... would i hear s.th. like my sweet gorilla guru instead? no way! you don't know my family yet! LOL, just kidding ... btw, it's crazy, but my stocks increased in the recent upswing far-far-far more than i've spend for our 4-folks-family for 3 weeks in indonesia including flight, hotel, trips, gifts, souvenirs, donations, etc.

hey! i like bull markets like the devil the hell . btw, i'm not going 2 sell any stocks soon! why? it's a bull market, you know? i will wait till the gold-dow-ratio will reach at least the level 2 or 3. in the last gold bull market in 1980 fell that ratio to 1. folks, that means 1 oz gold bought the whole dow jones index! great, isn't it?

B) my 1st re-read of lefebre's soooo great 'reminiscences of a stock operator' ... well, i'll watch out like hell to NOT REPEAT jesse livermore's mistakes myself AGAIN :-)

3) my portfolio in the winning zone again ... after a looooooong time (1+ year?) my stock investments turned positive again! nevertheless, i still hate that damned crashy october 2008
posted by jaro gruber @ 3:40 AM 5 comments:

is the gold price manipulated?

well, the most gold bugs forums, gata, gold & silver analysts etc. speak/write about that 100%-sure-issue like about religion .... but is this evil manipulation (to the downside, isn't it? sorry, just kidding :-) really sooooooo bad? hell, why does no one buy the manipulated & soooo cheap paper gold futures and requests physical delivery later on? there are many hedge funds specialized on arbitrage trading out there, isn't it?
and last but not least, what are the production costs for new gold deliveries? well, i do own stocks of sooo many gold/silver producers & explorers aaaaaaand i do subscribe for all of their newsletters ... even if i do not read more than the headline often i do remember that the cash costs per 1 oz @ goldcorp's red lake properties / canada are below $300 (that's $280 or the like!!!), there are many producers with cash costs between $300 - $500 ... and even the south african producers who have to dig really deep do not produce above $600/oz i think (sorry, i'm 2 lazy 2 look up the correct numbers ... it looks like work!)
==> is $940 per 1 oz gold really such a low + manipulated price?
just my 2 cents,
jaro.

ps: goldcorp's red lake mine
pps: we still can buy as much physical gold as we want to, isn't it? there are enough coin dealers, banks, gold account providers + other suppliers out there who offer PHYSICAL gold + silver, so if s.o. thinks the price is artifically low he/she should just grab as much as he/she can :-), so what?
ppps: whoever will try 2 manipulate, GATA's newsletter will tell us first ... ~ GATA ~ Gold Anti-Trust Action commitee

folks, let's take some advantage from lower prices after few days of fear and panic on the stock markets and open a small initial position in that sympathetic austrian green energy producer (esp. water power :-).

well, they are approx. 45% down from their all-time-high in winter 2008 (still remember the damned oil quotations up to $150?), they pay dividends about 3%, there should always be need 4 energy and thus some business 4 verbund ...

btw, why not a huuuuuuuge position straight away? damn! are you kidding? you know i've invested already much more as i should recently (still remember the plundered funds of last resort?)good luck, my green portfolio member :-)
posted by jaro gruber @ 11:49 PM No comments:

#jarobuys acadian mining, ECU silver, sabina silver ... OR who's opinion is right? mr. market's or mine?

well, i do not believe there is much time left 2 buy commodities soooooo cheap for too long especially gold, silver, gas, agriculture ...let's buy some more explorer stocks!

folks, watching my portfolio's pennystocks is like lottery. who will be lucky and who not today? few highlights:

what makes our poor homo sapiens financialis that crazy? is there any possible explanation? well, they've announced today:

btw, what's your opinion? maybe are there some folks who know more than that

or maybe even mr. market himself!

hell, a small loss even at these really high silver prices, cash costs per ounce increased from $11 to $13 ...

oh my dear! my mexican and peruvian producers have cash costs of approx $3 - $6, my base metals producers with silver as by-product abt $1 (@ scorpio mining i think) and there was also a company which has reported cash costs for silver of MINUS $5. silver for -5 usd? folks, got it? that's much, much, much better than silver for free! if they sold all their zinc, led, copper, they've made a profit above $5 and still have all that shiny silver on top! ... well, i didn't remember the name of that company, i think it was prolly one from the trio endeavor silver, 1st majestic silver, fortuna silver ... but i could be wrong on that ... you know, i have more than 30 silver companies in my portfolio as i can't store all of them in a single watch list @ tsx website :o)

hell, let's hope the metal prices in Q4 will support u.s. silver a lot + their stock price will skyrocket soon + i will reach the winning zone again (btw, even if the last purchase shows a profit of abt 13% i'm still abt 15% down on u.s. silver)

folks, wanna learn s.th. from others people's mistakes or better wait till u will do them yourself?

well, i've spent soooooo much time searching for the TOP 1 'trending topic' #itsuckswhen on twitter yesterday :o(. i think the poor michael jackson (RIP) couldn't move more folks 2 write some crazy/funny/awful/etc. stuff than such a senseless topic ... i came to bed @ 04:24 a.m. next morning ... could i do s.th. more useful instead? sure. could i at least balance my sleep deficits from last week instead? sure ...

could we learn anything from that? sure! the craziness & hysteria of homo sapiens has no limits, our financial bubbles are just a small examples of the mania of the 'financial' folks out there

btw, u could see my twitter-favorites-box here :o)

it became even more stupid few years later ... poorworld ... at least the proposed twitter account libertytalks seems to be something valuable :-) 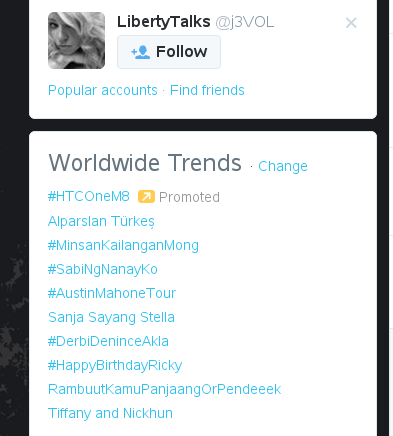