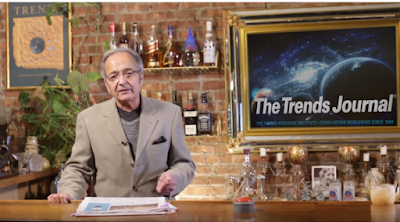 i just read gerald celente's forecast on top 10 trends for 2018, but you know what? it is even more interesting to hear his 'trends in the news' from december 6th first :-). on this single day we have had the bitcoin / cryptocurrency issue, upcoming war against iran (alliance out of usa, israel, saudi arabia vs. iran (+ palestine, hezbollah)), trump's fraudulent tax bill which is going to make the rich (corporations) even richer, fascism (symbiosis of state and corporate power), lying mainstream media, military-industrial complex, continuing war on iraq & afghanistan (10,000 killed civilians during u.s. led take-over of oil rich city of mosul from ISIS), ....

here we go, the top 10 trends for 2018 by gerald celente & trendsjournal: https://cdn3.creativecirclemedia.com/trendsjournal/files/ca75f87a04.html

i liked the above article better than the video below, but the information is very similar, so it is up to you which one you 'consume'. both? :o)

i have written about celente already few years ago (june 2011, he was one of the key speakers at the munich's gold bugs show in november 2012, in february 2009 as part of the zeitgeist movie), so you can be sure i really like his clear and funny way to speak about important issues.

stupid me, i've also written about bitcoin in early november 2013 when the price was around USD 300, but didn't buy any bitcoins then. at the former informedtrades.com traders' website we have also discussed bitcoins and cryptocurrencies much earlier. anyway, we thought they are too expensive when they were at USD 100, because we remembered the time when they costed USD 4. well, it was a missed huge opportunity to get really rich, my dears. but yes, my life is really nice and happy, so there are probably also much more important things out there than to get rich, aren't they? :-)

and yes, let's hope for all of us that celente is wrong on the escalation of the mideast conflict against iran which could lead to WW3 :-(