silver analysis by tekmnd, a guy who invests and risks his own money in the markets 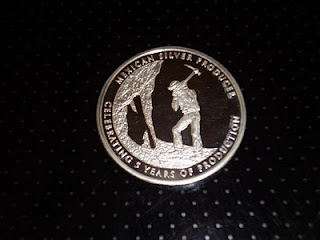 dear friends, the gold and silver prices are in a free fall, the blood bath in the miners and explorers sectors is far from over yet, so what's going on? let's post an interesting analysis made by a buddy of mine and the co-host of the informedtrades.com community, tekmnd. he is (among others) a trader and a silver buyer himself, so he prefers to do his own due diligence, you know? what does it mean? as you will discover soon, his analysis is completely different from the silver gurus analyses you can get all over the internet and/or mainstream media. unlike the silver gurus who are often coin dealers, newsletter writers, commodity (indexes) promoters etc and thus there is often a conflict of interests indeed, tekmnd invests and risks his own money ...

the silver analysis was originally posted here at InformedTrades yesterday, enjoy my re-print:

Silver dropped pretty hard this week. When I hear comments from the 'silver community,' it is so obvious that no one gets it.
Let's break down what happened-
US Mint lost money last year. Bullion demand was way down.
The world silver interim report in Nov showed that supply was way up and growing, and demand was declining. The week the Interim report came out, Sprott's headline was "demand is about to overtake supply."
The mint scaled back production and forced a sell out right after.

The sell out was sold as a big rush of demand.
The mint sell out was pushed as a shortage of supply when it had nothing to do with the physical supply of silver. I saw several videos claiming that the mint selling out was because producers couldn't keep up with supply when that had nothing to do with the sellout (and supply is at record high levels right now). The sellout was from the mint scaling back production to force all supply to sell out before the new release came out.

David Morgan first made videos suggesting price would go over $50 this year, and then made a video with a graph showing the price going into the hundreds.
Silver doctors and BrotherJohnF made videos/articles with false claims of silver costing $30 to produce, and said it meant silver would have to shoot up soon.
Silver doctors ran articles asking people if they were "all in" because price was about to shoot up.
Jim Rogers said that you couldn't buy coins when they were on sale.

Instead people were told that costs to produce are $30 when they are $11.
That supply is down when it is up.
That demand is overtaking supply when it is down.
That industrial demand is increasing exponentially when it was down last year and down 3 of the last 4 years.
That producers can't keep up with demand when inventories are at almost record high levels.

Anyone even catching on to the fact that my last vid showed that Fresnillo is growing by 75% to 100% in the next 5 years? That increase alone offsets the expected increase in industrial demand.

Anyone talking about the fact the reserves just majorally increased at many producers pretty much making the silver running out lie now a total joke? KGHM has just increased their reserves to 40 years of silver reserves (meaning they have proved that they can mine silver out for at least the next 40 years as long as silver is over $22 per ounce spot). Pan American, Fresnillo and Hochschild increases their reserves and resources every year. In fact, increasing reserves and resources on an ongoing basis is Pan American's mission statement on every financial statement they release.

Nope- you were told that "supply is tight, silver is running out, demand is up, industrial use is increasing (down last year, and down 3 of the last 4 years), and that the price decline is all a big conspiracy."

The 2013 World Survey comes out in 11 days. It is expected to yield results that are not favorable to the price of silver. Price is dropping heading into the release of this report.

I have said for 3 months this would happen (price would drop heading into this report).
Please pay attention next time

and yes, at my favorite coin dealer, there was never a real shortage in physical gold of silver supply in the last few years. only in late 2008 there were almost no silver coins available and the premiums of physical silver coins/bars shoot up to 40% above the paper silver price. at that time my dealer started to sell silver concentrate in 1 kg bags (which means there still was enough silver to buy)

last but not least, a news release i just got right now. there was a landslide in the 2nd largest U.S. silver mine and world’s largest copper mine kennecott in utah which is owned by rio tinto on april 10th, so the supply side could be hurt to some degree soon. read the whole news release here
~~~