addendum november 21, 2014: thanks commrades for taking action again :-) ... german police used pepper spray and clashed with anti-EU protesters, who stormed and vandalized the new European Central Bank building, which is under construction now in central frankfurt.


.
~~~
friends, i had to do some 'business' in frankfurt at the thailand consulate, so of course i have welcomed the chance to visit the #OccupyWallStreet camp in front of the ECB, talk to fellow protesters, give them the business card of the our (OccupyMunich) movement, liked their facebook action page, spent some time there, made a ton of pictures ... wanna see few of them? here we go, enjoy my corresponding picasa album 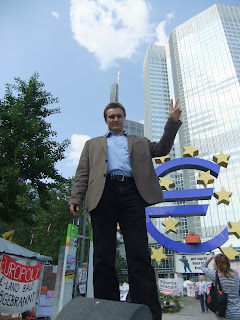 me in the blockupy camp in front of the occupied ECB, going to crash its fraudulent fiat money game ~ go gold bugs go 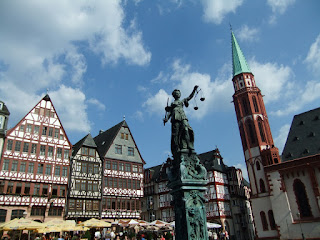 justitia? justice? just us? what about honest society concepts, my dear?