... waiting at the JFK airport after all that naked scanning and other controls and yes, reflecting what to think about the united police states of america ...

i liked NYC / NY / USA in many ways, but i'm really happy i do not have to live here ... simply too much surveillance, rules, regulations, orders to follow, police, harassment and the like ...


what did i like most? the many, many friendly people of so many different nations, cultures, colors and behaviours and that's also why i start my pictures not with the statue of liberty or the manhattan skyline but with a snapshot i've made in brooklyn at the beach at coney island, which isn't really an island but a beach on long island. btw, NY's east river isn't really a river but a sea inlet, etc and so forth. you see, the truth is often subject to interpretation ... 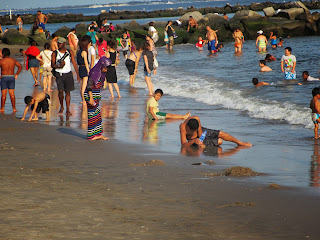 what about the 'lady' liberty? a beautiful symbol, indeed. unfortunately it is only a symbol nowadays ... just look at the current SYRIA issue. the usa is going to militarily attack syria for some unproven and maybe even a false flag action concerning a poison gas attack with many hundred people killed somewhere close to damascus a week ago. this new war will cost some american soldiers their lives and the lives of ten thousands or even hundreds of thousands of innocent syrians either. i think also many many lebanese will die. damn, you don’t doubt the war will capture lebanon and maybe even israel + iran as well, do you?

who did that strange and completely unnecessary gas attack for both military and tactically reasons as the syrian government forces already almost won the battle and have beaten the foreign financed (CIA, saudi arabia, qatar) + foreign equipped + foreign staffed (usbeks, afghans, chechens, ...) FSA in syria on a day the UN inspectors were supposed to visit the country? not many people know that for sure but all western world and especially its small dirty mainstream media blames the syrian government and president assad. hmmmmm, strange, isn't it? for me it looks the same like the made-up story about the WMD in iraq few years ago, doesn't it?

please allow me an easy question: why do countries which have everything (USA + western europe) attack via their bloody north atlantic terror organisation (NATO) poor nations like the ones in afghanistan, libya, syria? easy, isn’t it? yes, you are right, it’s because their current political system is IMHO fascism, the symbiosis of state and corporate power. of course is today’s fasicm a little bit different than hitler’s fascism was. even if it supports own big corporations (just remember all these bailouts for banks, car manufacturers etc in 2008 and 2009) and the surveillance is opposed against own population like the old nazi fascism also did, just the victims of system’s wars are as for now ‘only’ abroad (iraq, afghanistan, libya, syria, …). 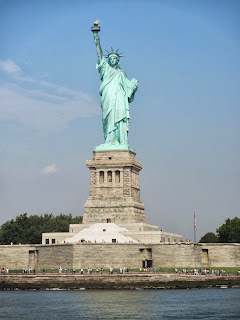 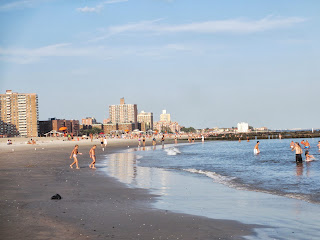 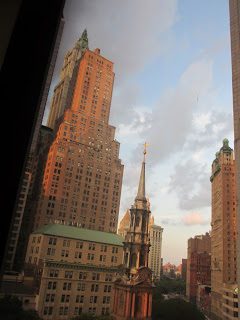 the view from our hotel hilton millenium (across from WTC). it was a really great place to explore manhattan, because there is everything soooo close or at least easy to reach :-) 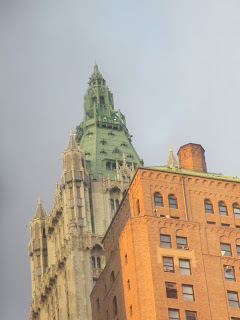 what about few details? the top of the woolworth building 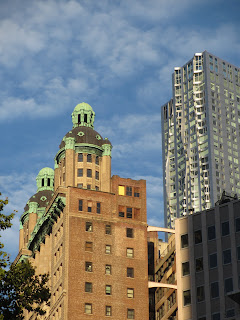 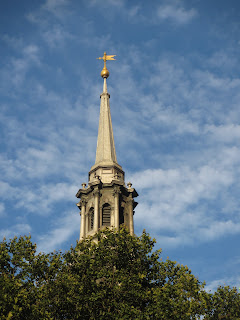 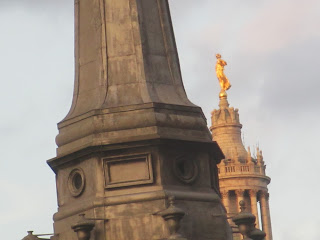 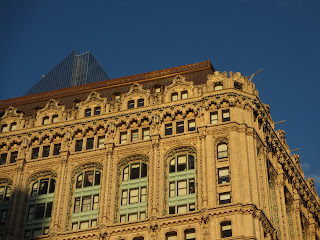 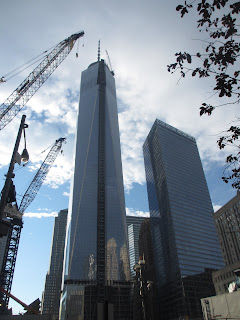 the new WTC, the highest building is almost finished ...

... the remaining ones not. 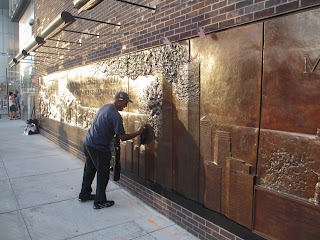 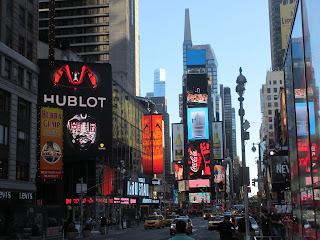 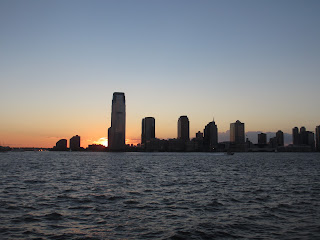 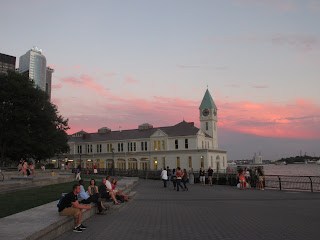 the battery park, one of our NY's favorite places 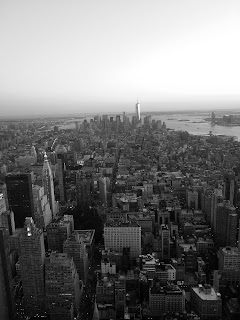 the view from the empire state building (picture made by my youngest daughter :-) 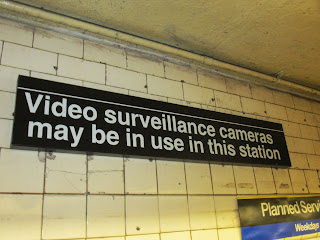 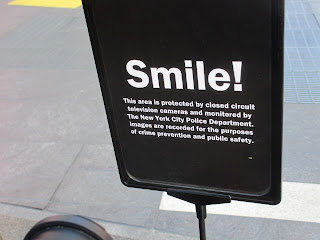 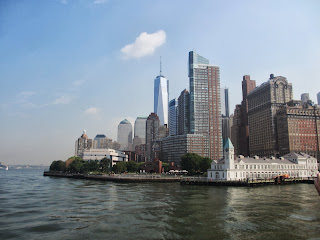 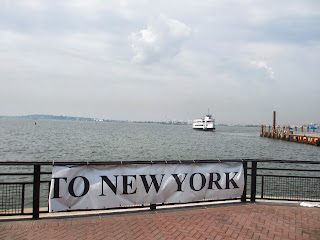 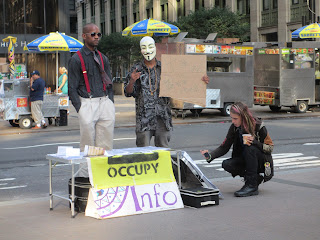 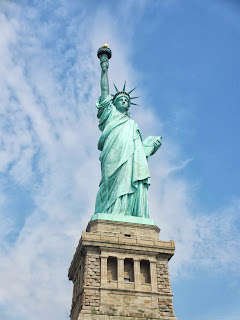 last but not least, let say you what my youngest daughter and myself did and what we didn’t in our week in NY. of course, we have seen also few of the landmarks and 'must see' places. what we really tried was to see as much from the ‘normal life’ as we could. what does it mean exactly? well, we didn’t walk in museums or sat in tourist sightseeing city tours buses for a second, even the free entry museums couldn’t catch our attention, my dears. well, we spend a lot of time in parks talking to american people (especially the battery and the zuccotti parks were our favorite destinations, visited two NY’s beaches (coney island in brooklyn + orchard beach in the bronx), visited some pubs on evenings in soho, eaten in the parks and local fast food restaurants like americans do, drunk beer hidden in plastic bags with my struggling OWS fellows in the zuccotti park and around the wall street … unfortunately, there is not much left from the occupy wall street protest at the moment, but for september 17th there is a big event planned concerning the 2nd anniversary of start of the occupation of the zuccotti park (Liberty Plaza Park), we will see if OWS could again get some public interest and wake up few more sheeple ... 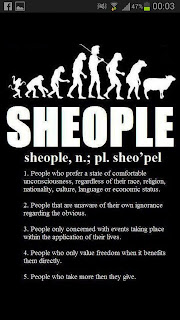 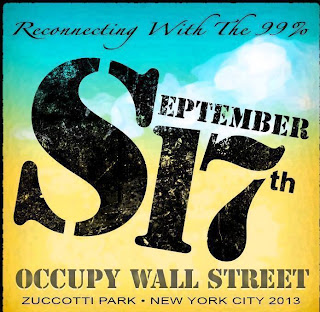 source: here
... more insights coming soon or never. there are much more pictures here, but please see the overview first and increase just the most interesting ones. for me are more pictures special in some way and therefore i have uploaded soooo many of them :-)