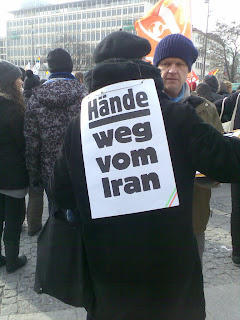 the bride of death, married to weapons and money (picture made by a buddy protester of mine)

did they 'got' all protesters? shame on you, you bankrupt monitoring state, shame on you! (picture made by a buddy protester of mine)

well, as every february when the war industry meets the western politics at the so called 'security' conference (SiKo) in munich [btw, the noble menues are sponsored by war industry, so the 'security' delegates have had a kraus-maffei (tanks) dinners and a EADS cassidian (missiles) lunches this year, lets hope they enjoyed their deadly meals] ... we go into the streets and protest (wanna visit the protest event website?)

anyway, lets see few of my pictures which show ya few of the many groups & ideas who joined the protest this year ~ PICTURES + my COMMENTS ;-)