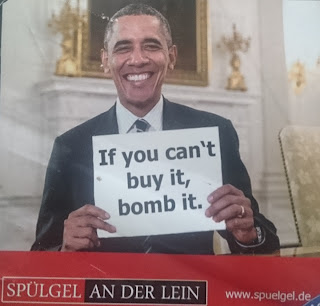 just in case you don't know why did the west and its allies in the last 20+ years attack and destroy so many countries (iraq, yugoslavia, afghanistan, lybia, syria, yemen, mali, somalia, ...) which have never threatened the west, the nobel prize laureate for peace, barrack hussein obama, has the answer for you: if you can't buy it, bomb it ....
~~~
poll: is it too late for improvement of the world order? YES/NO ?
i'm not sure, i hope not, but i'm really not sure... why? well, in the last few months we saw just huuuuge bailouts + socialization of losses + government interventions and regulations + an unbelievable increase in money supply all over the world instead of free markets. is there any hope for improvement? yes! yesterday was barack hussein obama elected as the new u.s. president. [btw, who are the strong powers behind him? the kennedy-clan + george soros + zbigniew brzezinski + ??? ok, but is it good or bad for the world? the time will show it :o)]. i hope he will correct few of bush's mistakes and maybe even end the wars on iraq, afghanistan, democracy, terror, ... and reduce budget deficits ... and so on ... that could help a little! but he has to speed up a lot before the winter comes, the kondratieff winter :o((
=> GOOD LUCK, BARACK!
.
posted by jaro gruber @ 2:58 PM