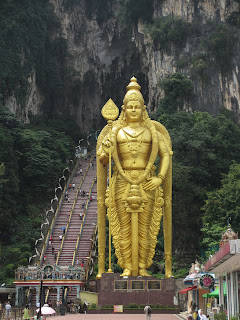 (golden?) lord murugan in front of the 272 steps leading to the hindu temple inside the batu caves

well, we have arrived 3 days ago, spent 2 full days in the streets + outskirts of kuala lumpur, malaysia ... and i still have no opinion how to 'classify' the city .... it is so diverse, you know? there are many many ethnic chinese folks (more than malay i would guess), malay, indian, european, indonesian, and yes, there is also our eldest daughter for 4 months right now :-)

and there are huge differences between the rich and not so rich people / areas /  markets / houses / ... between modern and traditional way of life, between high end technology in one field and simplest tools somewhere else, between this and that ... and such a huge variety of food, dress codes, religions, ...

damn, before i tell you what i think, feel, did, etc ... i do better show you some pictures and one video, ok?

PICTURES, PICTURES, PICTURES ... as for now unsorted, without comments ...  i  will comment them later + upload some more + delete the uninteresting ones later, so just take it as the 1st trial :-)

soo many ethnic different folk groups ... and in so many ways the same :-)


what's next? well, our interesting day trip jungle tour at FRIM's site (Forest Research Institute Malaysia) in kepong close to KL where we enjoyed the canopy walkway (pictures) in the tree tops and malacca / malakka / melaka