friends, let's listen to john stossel and let's stop bureaucrats, lobbyist, big governments and the like :-) 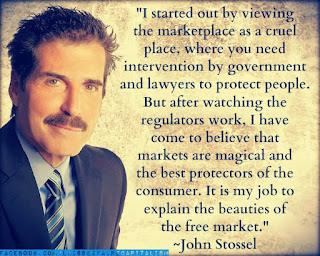 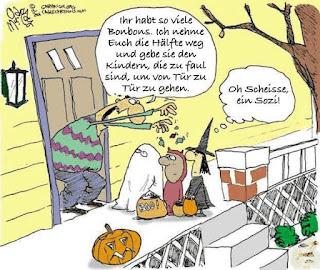 addendum october 2012: damn, let's first listen what jim rogers has to tell about that issue: ~ interview with the daily bell published on october 14th, 2012


Jim Rogers: That's the way the system is supposed to work. When people get in trouble, you clean out the system and then you start over. Competent people take over the assets, reorganize and start over. These days, with central banks and government, what happens is the central bank steps in to save everybody and instead of letting the system clean itself out the way that capitalism is supposed to work, the central banks mess it up, trying to save it. That's why the recession has lasted longer or the depression has lasted longer than it did before. So in answer to the question, yes, central banks make it worse not better.


Daily Bell: What about the resurgence of Fabian currency ideas like those held by Silvio Gesell and Major Douglas?


Jim Rogers: This did not work in the past and it won't work now. Nobody wants to be a communist any more. Nobody even wants to be a socialist – but if they want to be a socialist, they want to be a rich socialist. Now, if the world gets into more economic trouble in the next decade or so you are certainly going to have more of that kind of ideology come to the fore again. People are going to be unhappy and they are going to look for answers.


Socialism sounds okay to people, especially people who are suffering. Will it work? NO! It's never worked. Communism and socialism have failed many, many times and the propaganda notions will get the better of people when things go wrong. I am sure you are going to have a resurgence of all kinds of-off-the-wall economic theories as things get bad but none of them are going to work in the end. They may come to power but they are not going to work in the end.
posted by jaro gruber @ 2:02 AM