the real year end numbers will be coming soon, right after the u.s. + canadian markets close or tomorrow if i should be already too drunken in order to forget 2012 asap ... but i can tell you right now, this year was a disaster not only for my buy-and-hold mining stocks portfolio like in 2011 but also my micro trading account suffered a lot. why all of that? unfortunately, mainly because the real world out there did not fit to my believes about the world, economy, markets :-(
anyway, let's hope the upcoming year of the snake (= 2013) will be much, much, much better for commodity investments than the year of the dragon was ... or at least that i will be able to adjust my strategy to the real world in the financial markets :-) 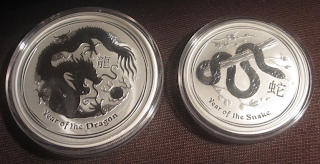 my outlook for 2013? not much different from previous years ... even if the current markets play the deflation card with falling commodity prices all over the board, i believe that the reckless money printing by our western governments and their small dirty central banks ECB, FED, BoE, SNB, BoJ, etc. will finally cause inflation, inflation, inflation with rising commodity + cost of living prices; the protectionism will cause a collapse of trade and the economy; the financial-military complex  will start a NATO war against iran even if iran did not threat any other country in the last few hundred years (unless the west would succeed to corrupt or assassinate iranian leaders or to 'buy' an al-qaeda / muslim brotherhood driven 'revolution' in iran ... do you remember the war template used in iraq, libya, syria?).

any other forecast? yes, the fraudulent debt + phony economy system will not survive 2013 as its lifeblood, the paper money system, will finally crash. why a monetary reform right in 2013? well, mainly because the system didn't crash in 2012, my dears and because there is a rising awakening and awareness all over the world, so there will be less people who will accept the power elites' solution which in the last few decades always was money printing + reduction of democracy + rising surveillance of own citizens + the like. just consider, 4 years after the stock market crash of 1929 came the great depression. now, 4 years after the crash of 2008 and after our current corrupt leaders made already similar mistakes as the past leaders did 80 years before (e.g. protectionism or the huge misallocation of capital through government's stimulus), the economy should reach the same disastrous state like it have had in 1933 i fear ....

anyway, go gold bugs go and let's finally crash the fraudulent fiat money system in 2013. yeah, let's make a better 2013 or at least a change for a better world :-) 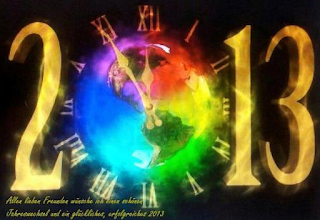