thx goodness i’ve increased my stake in vedron gold in may by approx. 60%. not bad jaro, not baaaaaaad at aaaaaaaall, yabbadabbadooo

damned hell, why didn’t tweet rob that message to me before informing all these media guys? and when will he invest also in my other struggling (nevada based!) gold explorers/miners like bravo ventures, coral gold, miranda gold, … and when will he increase his own stake in u.s. gold 2 help his weak performing stock also gain +126.92% in a single day?

ps: lexam explorations (one of mcewen's companies and the actual buyer of vedron's stock) is +35.71% today (maybe is their vedron investment at current price more worth than lexam itself - let's check the numbers later o). well, it's also nice 4 my portfolio even if lexam is still 50% down compared to my purchase price in summer 2007 (far before the october 2008 crash for most metal explorer stocks have destroyed sooo many dreams). btw, mcewen's flagship us gold is +2.33% today.

pps: folks, you still remember my comments about rob mcewen in my blog post concerning the gold-dow-ratio (Posted 07-19-2009), don’t u?


pps: folks, i do feel like if bravo venture could be the next take-over target ... wanna read more ? oki, pls follow here ...

addendum april 12, 2010: king world news interviewed rob mcewen on april 10, 2010 ... wanna hear the interview? pls go here :-)
In this interview Rob discusses the disastrous course of US policy, the possibility of hyperinflation in the US, consolidation in the mining sector, the coming explosive mania that will send gold skyrocketing in price and much more.


addendum november 5th, 2010: folks, ive met rob mcewen @ the precious metals fair in munich ... he was the key speaker of the conference, so i will prolly post some insights in my planned blog abt the event tomorrow or on sunday. just to let you know that (in his opinion) the time for buying gold/silver & mining stocks isnt over yet as he still sticks to the dow-gold-ratio in order 2 see when there is time for other opportunities than gold in the markets 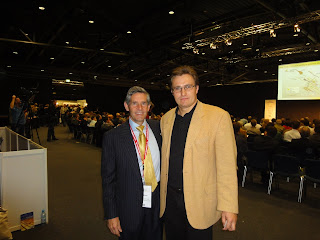